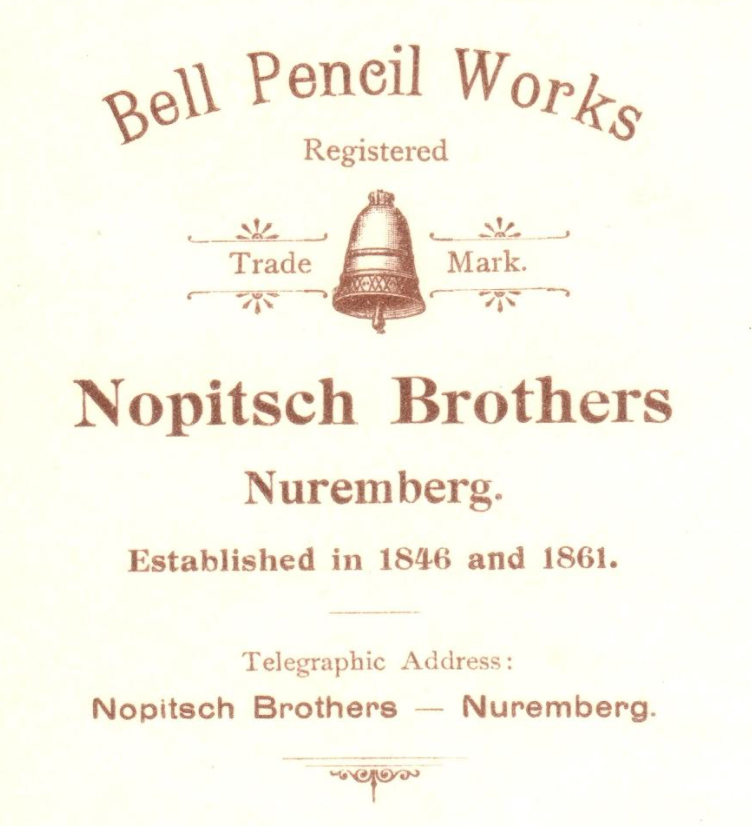 Founded in 1861 in Schweinau (now a district of Nuremberg, Bavaria) by Moritz Nopitsch (born 1838), operated initially under the name M. Nopitsch. In 1871, Moritz acquired the “Oberfichtenmühle” and set up a branch of his factory there. In 1874 the factory had about 140 employees (For comparison: at the same time Staedtler had about 50 workers). The trademark of the factory was a bell, which is why the company also appeared under the name Glocken-Bleistiftfabrik or abroad under Bell Pencil Works. After Moritz Nopitsch death of tuberculosis on 1876, his wife Caroline took over the management of the company. In 1886, the factory G. W. Sussner was taken over by Nopitsch. Initially, both factories were operated in parallel as separate factories (but both under Nopitsch’s management). But nevertheless, since then the logo of G. W. Sussner has also been the bell and most of the time the companies also appeared under the common name M. Nopitsch – G. W. Sussner, Bleistift- und Creta-Polycolor-Fabriken. After Moritz and Caroline Nopitsch's three sons Christian, Paul, and Heinrich had taken over the factory in 1891, the two factories (M. Nopitsch and G. W. Sussner) were merged in April 1900 and they changed the name to Vereinigte Bleistift- und Creta-Polycolor-Fabriken, Gebrüder Nopitsch, vormals M. Nopitsch, vormals G. W. Sussner (in English: United Pencil and Creta Polycolor Factories, Brothers Nopitsch, formerly M. Nopitsch, formerly G. W. Sussner). The short form of the company name used on the pens since then was Gebr. Nopitsch. Abroad, the name was also Nopitsch Bros. or in French-speaking areas Nopitsch Frères.

The products of the Nopitsch factory were awarded medals at the world exhibitions in Paris (1867, bronze), Santiago de Chile (1875, gold) and in Chicago (1893, “Columbus medal”). An 1878 newspaper report published in the Bayerische Handelszeitung stated that the “pencils from the Nopitsch factory were of the same quality as those from A. W. Faber”. The Nopitsch factory's sales agent for North America was the bookshop and publishing house J. B. Rolland & Fils in Montreal. There were also sale agents in London and Paris. In 1928, production was unfortunately discontinued because of sales difficulties. The trademark of the bell was sold in 1928 to the Nuremberg pencil company Breitenfelder.

Hat tip to Bertram Nopitsch, great-grandson of Heinrich Nopitsch, for this fascinating history.